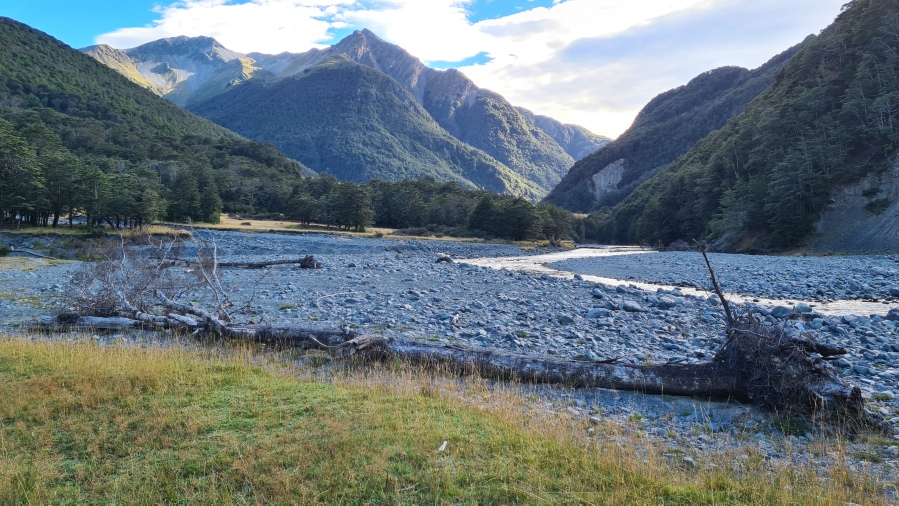 I had a good rest day yesterday and did a lot of planning for the final two weeks ahead. I have changed my flights to come home on the 8th of March. I plan to be walking into Bluff on the 5th or 6th but needed to give myself a buffer just in case of bad weather or any other hold ups. I would have easily made my original flight on the 4th if it wasn’t for being held up in Hanmer Springs for six days.

Queenstown has been great. It really is an awesome place to visit, with so much to see and do. I look forward to coming back with the family. Hopefully soon while it’s still not too busy.

The trail ends at the waterfront in Queenstown and starts again further up and on the other side of Lake Wakatipu where the Greenstone River comes out. I had an early start with a 1hr 30m drive to get around the lake to the trailhead.

The track was really nice and well formed, through forest and running alongside the river. It is a popular track up to Greenstone hut. I crossed a large swing bridge right before the hut and stopped there for a snack. The landscape is beautiful through here, walking up the forested river valley with mountains all around. I saw a Stag only about 20 meters away. It must not have heard me coming and got a fright when I came around the corner and took off. It was quick so I didn’t get a good look at him but was a decent size with big antlers. I know there are plenty around in the South Island but I never see them.

Beyond Greenstone hut the trail becomes less travelled. Heading away from the river but still mostly through forest. At times it would open up and the views were great. There were some boggy parts and mud which I need to get used to again coming into the Southland region.

I crossed a nice looking stream and stopped on the way over to take a photo. I dropped my phone as I took it out of my pocket. It bounced on a rock and landed right in the water. I threw my poles to the side and got down as quick as I could and grabbed it before it got washed downstream! It was submerged for about six seconds so hopefully it is water resistant enough to handle that. It is an essential piece of equipment when I’m on the trail. I use it for lots of things like GPS navigation, reading trail notes, weather reports, taking photos and writing this blog at the end of each day. I have also started downloading Netflix series and watching an episode or two before I go to sleep.

There was a bit of boggy swamp land around few small lakes before arriving at Taipo Hut. It was a really hot day and I was really thirsty. The river running next to the hut had some amazing swimming pools so I had a good long soak to cool down and wash off the mud and get clean then filled up my bottles to bring back to the hut.

This is a great little four bed hut. The mattresses are extra wide which I haven’t seen before. Very comfortable. A french guy called Julian turned up heading northbound. He carries a fishing rod and is fishing the rivers and lakes on the way. Then Andrew arrived after having a rest day in Queenstown too. We are aiming to finish on the same day at Bluff. Then Carl arrived not long after. I met Carl briefly in Albert Town.